The capital of Romania, Bucharest is the country’s largest city with a population of just under two million. Located in the south-east of the country, nestled between the Carpathian Mountains and the Black Sea, the city is the cultural, historical, industrial and financial centre of Romania and the perfect place to begin a tour of the country, with Transylvania only a short drive away.

The city was first mentioned in documents in 1459 and become the capital in 1862. It exhibits an eclectic mixture of architecture ranging from Neoclassical, Art Nouveau, communist era and modern to name a few. With the onset of communism, the city was rapidly built up with a severe Stalinist architecture. Many of the elegant buildings were destroyed during the programme of systemisation during the regime of Nicolae Ceaușescu. Nevertheless, the city manages to exude a certain charm with Belle Époque-style villas and Byzantine churches tucked around hidden corners.

Perhaps the most well-known building is the former presidential residence the Palace of Parliament (also know as ‘The People’s Palace’. This is the holder of several world records including ‘the heaviest building’ and ‘the largest building’. Building commenced in 1984 and is still ongoing. It houses 1,100 rooms across nine stories above ground and nine subterranean levels which include nuclear bunkers with capacity for thousands, two parking lots and secret tunnels allegedly leading to nearby buildings.

The Old Town (Lipscani area) is a complex jumble of cobbled streets with many restaurants, coffee shops, bars and nightclubs. It is also home to the Old Princely Court (Curtea Veche), the residence of Prince Vlad the Impaler in the 15th century. 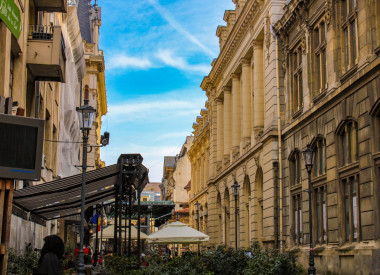