Stretching for almost 6,000 kilometres from Lebanon to Mozambique, the Great Rift Valley divides Kenya in two from east to west, forming a dramatic natural wonder that can be seen from space. The Rift Valley was created many millennia ago as geological forces ripped the earth apart, giving way to serene landscapes including freshwater and saline lakes, coral reefs, towering volcanoes and savannah rich in wildlife. This is one of Africa’s most biodiverse regions, offering excellent wildlife-viewing opportunities and other activities including walking, birdwatching and boat rides. The region is known as the Cradle of Mankind due to the vast amount of hominid fossils found in the area, and it is Kenya’s most prominent topographical feature.

Until the start of the 20th century, the Masai people inhabited both sides of the Rift Valley, when they were forced from their grazing grounds by the European settlers.

Thanks to its unique position on the Great Rift Valley, Kenya is home to more than half of Africa’s lakes. Eight lakes make up the system, two freshwater and six alkaline, stretching from Lake Turkana in the north to Lake Magadi in the southeast. The large flocks of flamingos for which the Kenyan lakes have become famous are found on the alkaline lakes, getting their pink colour from the crustaceans they feed on.

Lake Nakuru is a tree-lined salt lake home to greater and lesser flamingos, although in recent years the numbers of flamingos have reduced due to increased water levels. Nakuru is a stunning area, with a range of habitats around the lake including rocky outcrops, acacia forests, waterfalls and wooded hills. This is one of the best places in Kenya to spot the black and white rhinos. Other wildlife in Lake Nakuru includes giraffes, warthogs, baboons, zebras, hippos and monkeys. The park is fenced to protect the rhino and giraffe, so it doesn’t support elephants, although the rest of the Big Five can be found here.

Other lakes in the Rift Valley include Lake Naivasha, a picturesque freshwater lake with a mountain backdrop and floating papyrus islands. Sitting at an altitude of 1,884 metres, it is the highest of all the Rift Valley lakes. The high-altitude lake hosts hippos and also serves as a watering hole for zebras, buffalos, elands, impalas and waterbucks. The park is rich in birdlife, with species including cormorants and pelicans.

Located between Lake Naivasha and Lake Nakuru, Lake Elmenteita boasts a spectacular setting, framed by the broken caldera walls of several extinct volcanoes. The lake is an important breeding ground for some 400 bird species including flamingos and pelicans. Forming part of the Soysambu Conservancy, Lake Elmenteita is also home to zebras, gazelles, warthogs as well as rarer breeds such as the Rothschild giraffe and colobus monkeys.  The landscape around the lake is diverse, with craters, lava flows, plugs and other remnants of the area’s volcanic history. 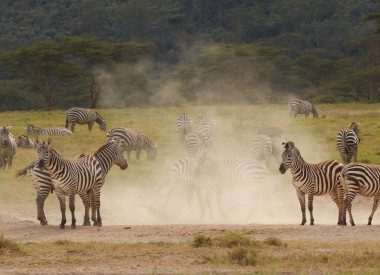