Arguably the highlight of any visit to Jordan is the astounding ancient city of Petra. Etched into the sandstone walls of a remote valley in the heart of the Shara Mountains and veiled by an impenetrable barrier of rock, the ‘Rose City’ remains shrouded in mystery.

Founded as early as 4th Century BC by the Nabataeans, nomadic Arabs, who realised the strategic importance of the area on the incense trade route, the city grew to become one of the richest in the region and that challenged the might of the Roman Empire. As sea trade emerged at the turn of the first millennium, Petra’s dominance dwindled until only a handful of nomads remained in the city complex. Decline continued and it wasn’t until the Swiss traveller Johan Ludwig Burckhardt ‘rediscovered’ the city during his expedition of 1812 that the allure of the city was reignited.

Access to the great ancient city is an epic one. Navigating the tall, echoing sliver through the Siq canyon feels as though you are rediscovering the city for yourself when encountered with the iconic image of the Treasury façade intricately carved into the sandstone cliff face and recognisable to many as the backdrop to Indiana Jones and The Last Crusade. Deeper exploration takes you past the Theatre and Royal Tombs before a climb up stone steps reveals the monumental Monastery, the city’s largest structure, carved from an existing mountain summit.

Time can be spent exploring the extremities of the site. Of particular interest is The High Place of Sacrifice, accessed by stone steps, that offers an amazing view of the site from a mountain-top altar.

For a different perspective, Petra can be visited at night when thousands of candles are placed throughout the site lending a unique ambiance. 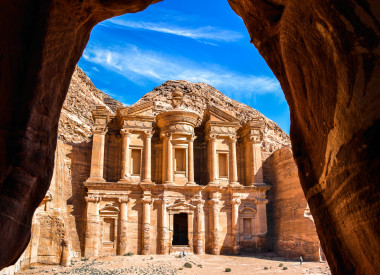