It’s hard to overstate the ‘cultural’ element of the cultural triangle. The area contains the holy sites, palaces and fortresses of a civilisation that lasted over 2,000 years. Looking on a map, you can draw the Triangle with your finger. The bottom tip is the city of Kandy, the last outpost of the Sinhalese monarchy before it was subsumed by the British Empire. Tracing a line northwards you reach Anuradhapura, the second corner of the triangle and the Sinhala kingdom’s most important capital. It was from here that the Sinhalese royals ruled for almost 1,500 years, abandoning the city in the 11th century after it was razed by Indian conquerors. The jungle was left to grow over the city ruins, and the site wasn’t excavated again until the 19th century. Head southeast from here and you find the spot where the royals fled to: Polonnaruwa, the last point of the triangle. Here you can visit the complex of royal palaces that were built when it became the new capital.

Within the triangle, there are yet more cultural treasures. Standing atop a 200 metre plateau lies a grand palace known as Sigiriya, or “Lion Rock”. The elaborate grounds were built by King Kashyapa in the 5th century, and display a wealth of royal decadence. The entrance to the castle was once a lion’s mouth, flanked by two large stone claws. The lion’s head has since collapsed, but you can still stand between its mighty paws. Nearby is the mirror wall, a plaster wall that was once so highly polished that the king could see his reflection in it as he walked by. The wall now contains graffiti from the 8th century, with love poems and clever quips written in ancient Sinhalese. There are many more sights within the palace, including ancient erotic frescoes and ingenious water fountains that still function after 1,500 years. Facing the palace from across the plains are the Dambulla cave temples, a sacred Buddhist pilgrimage site that’s been in continuous use for over two millennia. The caves are filled with devotional paintings and over 150 statues of the Buddha. Here you’ll find yourself alongside brightly-clad monks and pilgrims dressed in white.

The cultural triangle has an incredible breadth of natural beauty too. The area is home to several national parks, including Wasgamuwa, Minneriya and Knuckles. Minneriya National Park is regarded as the best park in the country for seeing elephants. Wild herds often congregate at the Minneriya tank, a large man-made lake which was first built to irrigate the paddy fields, but now acts as a watering hole for local wildlife. They are easy to spot from safari vehicles, as the tank is surrounded by grassy open plains.  Meanwhile, Wasgamuwa National Park stands out for its population of predators, especially bears. In fact, ‘Wasgamuwa’ means ‘forest of the sloth bear’ in Sinhalese. This park is less visited than others in Sri Lanka, giving it a more exclusive feel. In both parks you can spot monkeys, leopards, crocodiles, buffalo, Sambar deer, and over 170 varieties of bird. 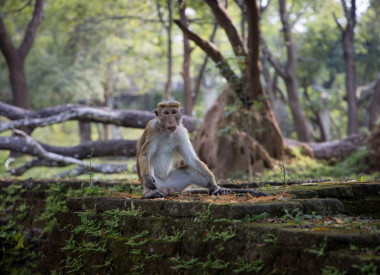