The largest city in East Africa, Nairobi is a fast-growing metropolitan capital situated at 1,700 metres above sea level, with a population of 4 million. Nairobi is a city of contrasts, with towering skyscrapers in the centre overlooking shanty towns on the outskirts.

The city of Nairobi was founded in 1899 as a settlement on the Uganda Railway which extended from Mombasa on the coast to Port Florence on Lake Victoria, and now to Kampala. Nairobi was initially a supply depot for the Indian labourers employed by the British, but the town grew to replace Mombasa as Kenya’s capital city in 1907.

Today, influences of Asia, Europe and Africa can be seen in the city’s older buildings, although most of the colonial-era buildings have been replaced by modern high-rise offices in the Central Business District. Within the city itself, attractions include the National Museum, Giraffe Centre, Village Market and Karen Blixen Museum. There are a range of good hotels, bars and restaurants to choose from.

Nairobi has its own small national park on the outskirts of the city, home to four of the Big Five (there are no elephants in the national park) as well as the world’s densest concentration of black rhinos, which can be viewed against a backdrop of skyscrapers and incoming planes. Apart from being the safari capital of the world, Nairobi is also a great starting point for a Kenya tour, with a prime position not far from Kenya’s most popular safari destinations. 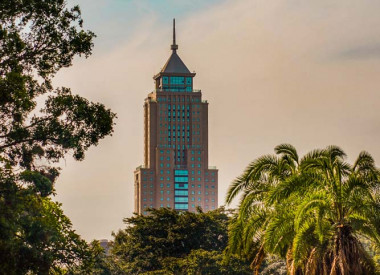