Ol Pejeta Conservancy is a 90,000 acre wildlife conservancy in central Kenya, situated between the Aberdare Mountains and Mount Kenya. It is known for its conservation efforts, providing a safe haven for wildlife, notably the rhino. It is home to the largest population of black rhino in East Africa, and the last two surviving northern white rhinos in the world. Ol Pejeta has managed to increase the black rhino population from just four in the late 1980s, to over 100 today. Originally set up as a cattle ranch, herds of elephants destroyed the fenced enclosures, so Ol Pejeta Conservancy was established in 1988. As well as implementing the breeding programme, they support local communities through education, healthcare and infrastructure. Aside from rhinos, Ol Pejeta is also home to the Big Five as well as zebras, giraffes, gazelles and baboons.

The chimpanzee sanctuary was established by the Jane Goodall Institute to rescue and support orphaned and abandoned chimpanzees from their natural home in West and Central Africa. At the sanctuary, these amazing creatures are nursed back to health and introduced into one of two groups residing in huge natural enclosures separated by the Ewaso Nyiro River, where they have a chance to socialise, climb and explore with the other chimps.

One of the best ways to experience Ol Pejeta is on a night game drive. This is unique and cannot be done in Kenya's other national parks, due to regulations. In a safari vehicle with no more than six people, you will be taken out into the conservancy after sunset, when the bush comes alive with nocturnal animals including lions, leopards, aardvarks, white-tailed mongooses, caracals and if you’re lucky, the bat-eared fox.

There is an information centre which offers visitors the opportunity to learn about the different wildlife species that live on Ol Pejeta, and the conservation works being carried out to preserve the wilderness. Visitors can also learn about local culture and traditions by meeting the Samburu, Turkana, Pokot and Masai people. 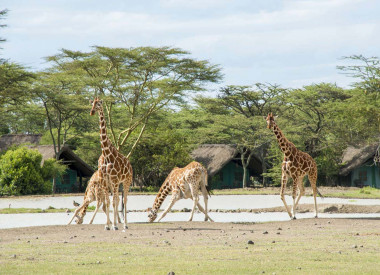