Established in 1985, Samburu National Reserve is one of Kenya’s lesser-known and lesser visited national parks, situated alongside the Ewaso Nyiro River in Kenya’s Rift Valley province.

Samburu offers peaceful, scenic beauty, thanks to it once being inaccessible to tourists, which allowed the flora and fauna to flourish. Although not as iconic as the Masai Mara, Samburu National Reserve is brimming with wildlife including lions, leopards, cheetahs, wild dogs and rarer species known as the Samburu Special Five: Gerenuk, Grevy’s zebra, Somali Ostrich, Belisa Oryx and Reticulated Giraffe. These are not found in any of Kenya’s southern reserves, making a trip to the north well worth it. Smaller inhabitants include baboons, warthogs, hyenas and various species of antelope. Samburu is a birdwatcher’s paradise, with over 450 species recorded including kingfishers and sunbirds. 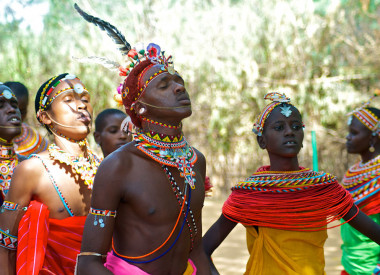