Situated on the south-western coast, stretching across 129,449 square kilometres, the Western Cape is the fourth largest of the nine provinces that make up South Africa. Cape Town is the capital, home to around two thirds of the province’s population. Until 1994, this was part of the former Cape of Good Hope. The Western Cape comprises a variety of landscapes including the semiarid plateaus of the Karoo region, the rocky outcrops, the Great Swart Mountains, wild coastlines and tiny fishing villages. One of the province’s main draws is that it lies bordered by the Indian Ocean to the south and the Atlantic to the west.

Although the Kruger National Park is South Africa’s iconic safari destination, it is not the only option. The Western Cape also offers some excellent game viewing opportunities in a reserve on the Garden Route. The Gondwana Game Reserve is a scenic four-hour drive from Cape Town, and is the only fynbos reserve in the world that’s home to free roaming Big 5. The game reserve’s malaria-free climate and exceptional year-round game viewing are two of its main draws. The Big 5 can be found here (although leopard are rarely seen), as well as giraffe, hippo, zebra and eland, against a backdrop of the Langeberg and Outeniqua Mountains. Gondwana has re-introduced many species in a continued conservation effort to sustain endangered animals, including the Cape mountain zebra and south-central black rhino. The luxurious stand-alone suites offer panoramic views of the surrounding bush, and there are numerous activities on offer as well as facilities including an infinity pool, spa and outdoor boma.

Read our Director's blog to find out why Gondwana was the highlight of his trip. 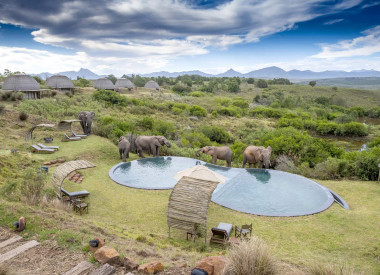