The largest city in South Africa, Johannesburg is known as the City of Gold, thanks to the mining barons who made their fortunes there in the late 1800s and early 1900s. Today the city is South Africa’s economic powerhouse and the nickname is as applicable as ever to the many rural people who make their way to Johannesburg in the hopes of improving their lot.

Not a scenic city, what Johannesburg lacks in charm, it makes up for in raw energy. This is most evident in the downtown area where a mix of old, tired apartment blocks and recently gentrified buildings stand almost side-by-side.

The more upmarket areas of Johannesburg are found north of the centre, and are the realm of sprawling residential properties on tree-lined streets and upmarket shopping malls with glistening glass facades.

A number of interesting sites are found in this area too, such as the expansive park at Zoo Lake, and Constitution Hill, a prison-turned-museum which educates visitors on South Africa’s racially segregated past.

For those particularly interested in South Africa’s rocky history, the south of Johannesburg is home to the comprehensive Apartheid Museum, which explains the history of Apartheid from the days the settlers arrived to the day the first democratic elections were held.

Soweto is a sprawling township, or more accurately, a cluster of townships on the south-western flank of Johannesburg. Vibrant and upbeat, it is home to anti-apartheid activists, Nobel Prize winners and social protest that rocked the world. Soweto was created in the 1930s, with Orlando the first township established. 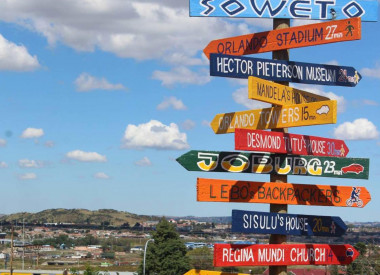