The ancient Illyiran ciy of Apollonia resides on a windswept hilltop overlooking the plains of southern Albania out to the Adriatic. Founded in 588 BC, much of the city remains unearthed with the only real excavations taking place within the city walls. The undoubted highlight has to be the restored façade of the 2nd century AD administrative centre complete with elegant pillars and the theatre sat opposite.

Housed within the walls of the much later Byzantine Monastery and Church of St Mary is the Apollonia Museum which gives good insight in to the city and showcases some of the incredible and well-preserved artefacts recused from the ruins, including an intricately restored and extremely rare Illyrian shield, various marble busts and statues and exquisite glassware and ceramics. 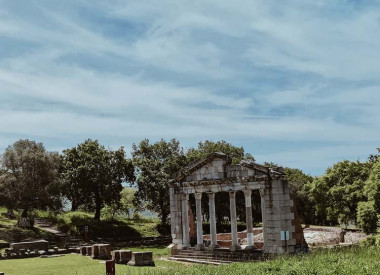