One of the oldest settlements in Albania – nearly 2,400 years old -  and famous for its Old Town Ottoman architecture and the white houses that appear to climb up the steep hills towards the castle or ‘Kalaja’, Berat is commonly referred to as the ‘town of a thousand windows’ and has been garnered with Unesco World Heritage protection since 2008. The town exudes a medieval feel and, uniquely, the inhabitants still live within the old castle walls. The warren-like alleyways can be explored on foot with hidden gems seemingly found around every corner. The ensemble of Byzantine churches, including Shën Mëhilli, Shën Maria e Vllahernës, Shën Triadha and the post-Byzantine Cathedral of Shën Maria are extraordinary examples.

Climbing to the castle of Berat lends incredible panoramic views of the Old Town and the surrounding Osum River valley which sits just across from the Gorica neighbourhood which sits at the foot of the hill. 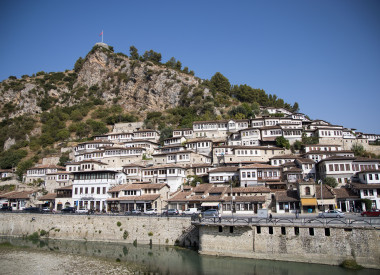