Taking the crown of Albania’s first UNESCO World heritage site in 1992, the ancient archaeological ruins of Butrint span a history of 2,500 years. With remnants of Ancient Greek, Roman, Byzantine and other eras sprawled across the 29 square kilometre national park – the largest in the country. Butrint is a treasure trove of history. The site itself is set within a fantastic natural setting which only adds to the romance and beauty of the area. Set on the shores of Lake Butrint – a wetland sanctuary of international importance with an abundance of both bird and plant species - the soundtrack of frogs and wind rustling the cypresses creates a magical and unforgettable scene.

Discover the immaculately preserved Greek amphitheatre, the Roman baptistery and Grand Basilica, both with vibrant mosaic floors, and the impressive Venetian Tower standing guard across a key port entrance. Exploring the ancient city reveals various human touches such as the etchings daubed across the ancient viaduct walls. 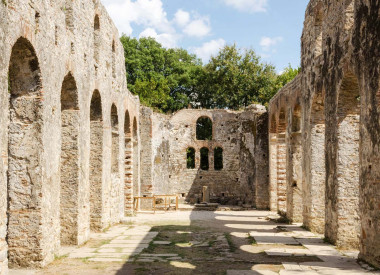