Commonly referred to as the ‘City of Stone’, Gjirokastër is one of Albania’s most attractive sites. Perched in the valley between the Gjerë Mountains and the Drino, the city originated with the construction of a fourth century castle which often tops the list of the region’s most impressive castles. Inside the fortress lies the Museum of Weapons which exhibits an impressive collection of weapons through the ages.

The city has been protected by Unesco since 2005 and it’s 600 monumental Ottoman-era houses are the main attraction. Also of note is the home of the former Albanian dictator Enver Hoxha for which the town has become synonymous 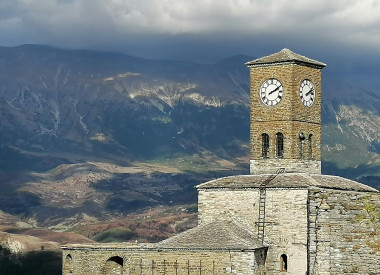