The capital city of Albania, Tirana, is reached by a short three hour direct flight from London. Located in the heart of the country, Tirana is home to a population of around half a million and is one of the sunniest cities in Europe.

A lively and cacophonous city, Tirana has undergone an extraordinary transformation since the early 1990s and awakening from its communist slumber. Many of the once grey and drab communist era apartment buildings have now been enlivened with brash and bright primary colours giving the city a fresh and modern feel. The gaudy architecture of the Enver Hoxha regime still dominates the city, however, ornate Ottoman and Italian structures remain proudly dotted throughout.

At the heart of the city lies Skanderbeg Square named after the national hero who unsuccessfully lead the resistance to the fifteenth-century Ottoman invasions, and where a 10m statue of the Communist Dictator Enver Hoxha was torn down in 1991. The square represents the new Albania and is best visited in the evenings when crowds gather to enjoy the traditional music played by the many talented buskers.

The trendy district of Blloku is best for sampling the traditional café culture of Albania. Order a strong dark coffee and enjoy whilst people watching.

Tirana’s chequered history can be learned by visiting the various museums of the city. The National History Museum gives a great oversight of the countries past whilst Bunk’Art 1 – housed in a converted Cold War underground bunker built for the country’s political elite – showcases the recent history of the nation from 1939. 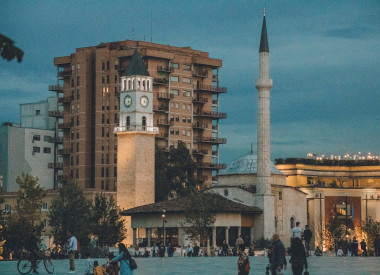