Tallinn is the capital of Estonia and one of the best preserved medieval cities in northern Europe. Boasting winding cobblestone streets, well-preserved city walls and enchanting medieval ambience, Tallinn’s Old Town is listed as a UNESCO World Heritage site.

At the heart of the Old Town is the Town Hall Square with the Town Hall and its tower completed in 1404. It is the only surviving Gothic town hall in northern Europe. From the tower of the Town Hall are beautiful views of the sprawling Old Town. The Raeapteek, or Town Hall Pharmacy, is the oldest continuously-operating pharmacy in Europe that’s still in its original building. Historians have not been able to determine the exact date the pharmacy opened, but records show it was already on its third owner in 1422.

Towering above the Old Town is Toompea Hill and Toompea Castle is the seat of the Estonian Parliament. From the Kohtuotsa and Patkuli view platforms are sweeping views of the Old Town, its red-tiled roofs, towers and walls. Another landmark atop Toompea Hill is the Alexander Nevsky Cathedral, an orthodox cathedral built in the Russian Revival style.

Kadriorg Palace is Estonia’s only Baroque Palace, built more than 300 years ago when commissioned by Russian Tsar Peter the Great. The palace currently houses the Kadriorg Art Museeum, displaying art from the 16th to 20th centuries. The palace is surrounded by a garden of fountains, hedges and flowerbeds modelled on Versailles. 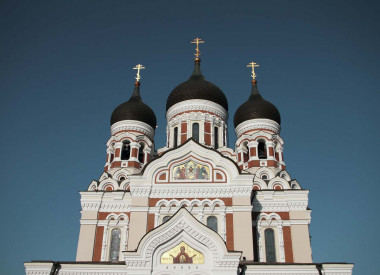