Akureyri is Iceland’s second largest city and the ‘Capital of the North’ serving as a gateway to the northern region of Iceland. Though technically a city, Akureyri’s population is only 20,000 people.

Akureyri lies at the bottom of Iceland’s longest fjord Eyjafjörður; the fertile waters mean there is a wealth of wildlife in the surrounding seas. Explored by boat tour, the most common sightings are that of humpback whales, harbour porpoises and white-beaked dolphins but orca and fin whales can be spotted too.

Located against a backdrop of dramatic snow-capped mountains, Akureyri is a picturesque town with brightly painted wooden houses, small museums, cosy restaurants and sleepy streets. Dominating the town from above is the basalt Church (Akureyrarkirkja) with its striking futuristic façade. Akureyri’s tranquil botanical garden (Lystigarðurinn) is the northernmost in the world, hosting many high-latitude and high-altitude plants from around the world. 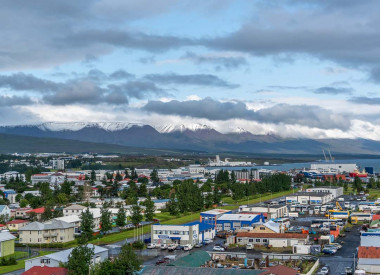