The Geysir Geothermal Area is a hot-spring haven in the Haukadalur Valley, teeming with fumaroles, hot springs and bubbling mud-pits. Although Geysir is the largest geyser, it is rarely active. The English word ‘geyser’ was adopted from Geysir itself, meaning all other geysers around the world are named after this specific one. Strokkur is the most famous geyser, shooting jets of boiling water up to 40 metres high every five to ten minutes, providing a spectacular, and dependable, display.

Gullfoss is one of Iceland’s most iconic waterfalls. The water plummets 32 metres into the Hvítá river canyon, kicking up magnificent walls of spray before thundering down on a rocky ravine. Other waterfalls near the Golden Circle route are Skógafoss and Seljalandsfoss.

Thingvellir National Park is the only UNESCO World Heritage site on the Icelandic mainland. It is a site of historical, cultural, and geological significance. This is where the North American and Eurasian tectonic plates meet and is one of the few places in the world where you can walk in-between the continents. Þingvellir means ‘assembly fields’ and in the year 930 AD, Iceland’s historic democratic parliament was founded there. 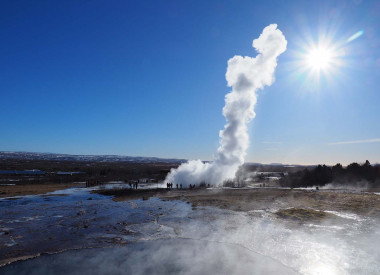 View all holidays visiting The Golden Circle View all