The Lake Mývatn area located in northern Iceland is known for its wealth of flora, fauna and volcanism and has some of the most dramatic landscapes in Iceland.  It is dotted with volcanic islands and is surrounded by craters, hot springs and lava formations.

The high geothermal activity beneath Mývatn results in naturally heated waters. A popular option is Mývatn Nature Baths with its serene milky-blue waters and incredible views. There is a 5000m2 geothermal bathing pool maintained at 36-40 degrees Celsius and two natural steam baths close to 50 degrees Celsius. The warm water contains a unique blend of minerals, particularly sulphur, which is said to be good for skin and respiratory problems.

On the journey from Akureyri to Mývatn, the spectacular Goðafoss waterfall (‘Waterfall of the Gods’) is shrouded in mystery, with the legend being that the waterfall was named when lawspeaker Thorgeir Ljósvetningagodi made Christianity the official religion of Iceland in 1000 AD, although pagans could still practice in private. Upon returning home, Thorgeir supposedly threw his statues of the Norse gods into the waterfall.

Mývatn is the starting point for exploring the surrounding geothermal and geological sites. On the east side is Dimmuborgir, a dramatic lava field formed 2,300 years ago. It is often compared to a medieval castle as its rocks resemble rising towers and its caves delve deep into the earth like hidden chambers and dungeons. Grjótagjá is a hot spring cave hidden within Dimmuborgir.

Also to the east of Mývatn is the largest waterfall in Iceland and the most powerful waterfall in Europe: Dettifoss. The thunderous falls are 100 metres wide and cascade 45 metres down into the deep Jökulsárgljúfur canyon.

North of Lake Mývatn is the volcanic caldera Krafla. It is located on the Mid-Atlantic Ridge which separates the North American and Eurasian tectonic plates. Along this ridge is home to Iceland’s most active volcanoes; one of these is Krafla, having erupted 29 times. The Víti crater is known for its aqua blue water and colourful mountains. South of the Krafla area, but not actually within the caldera is Námafjall, a mountain, beneath which is Hverir, a geothermal area with boiling mudpools and steaming fumaroles.

On the south side of Mývatn are the Skútustadagígar pseudo craters. Unlike regular craters, which are formed when lava builds up around a fissure in the earth, these pseudo craters were formed by gas explosions when boiling lava flowed over the swampy wetlands. The area is popular for birdwatchers with many species of duck found in the waters throughout the year. 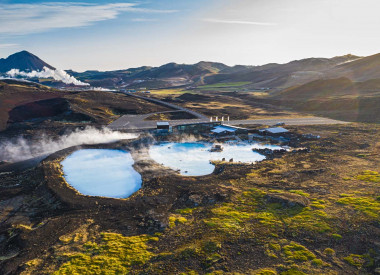