Founded by Viking settlers in the late 9th century, the name Reykjavík translates to ‘smoky bay’ due to the steam rising from the surrounding hot springs. The 1703 census recorded 69 Reykjavikians and until the 20th century, Reykjavík was a small fishing village and trading post. Today, Reykjavík is home to over two-thirds of Iceland’s population and is the commercial, industrial and cultural centre of the island.

Reykjavík’s tiny downtown area can be walked in less than a day. There is no shortage of things to do with many museums celebrating Iceland’s Viking history, art galleries and a global gastronomic scene.  Towering over the centre of Reykjavík is Hallgrímskirkja Church, the largest church in Iceland. It has an observation tower with panoramic views of the city and surrounding mountains. In front of the church is a statue of Leif Eriksson, who discovered North America in the year 1000, more than 500 years before Columbus.

For a great introduction of Iceland’s iconic landscapes, perhaps visit FlyOver Iceland, an immersive virtual flight ride with special effects. Soar over sprawling glaciers and dip through deep canyons on this state-of-the-art journey.

For those looking for something more unusual, on the outskirts of Reykjavík is the Icelandic Phallological Museum. It contains a collection of more than 200 penises belonging to almost all the land and sea mammals that can be found in Iceland. The sheer volume of phalli makes any ordinary Natural History Museums look extremely tame.

Despite being the gateway to exploring the rest of Iceland, Reykjavík also has natural wonders on its doorstep. There are several hot springs in the vicinity, the most well-known being the Blue Lagoon geothermal spa. 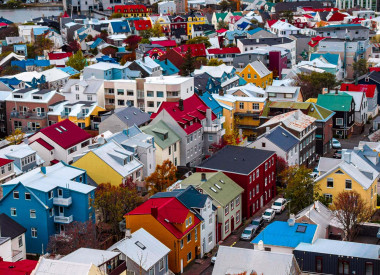