Vík í Mýrdal is the southernmost village in Iceland. This small seafront town, often shortened to Vík, is home to many natural wonders in the vicinity.

Adjacent to the village is Reynisfjara, a beautiful black-sand beach. Reynisfjara is located near the dormant Katla Volcano and its black sand was formed during one of Katla’s major eruptions, where the combination of hot lava and water forms fragments of volcanic sand and debris.

Aside from the photogenic pitch-black coast, the beach has enormous hexagonal-shaped basalt columns, towering cliffs and basalt caves. The tall black basalt columns of the south coast have inspired Iceland’s architects, most famously Hallgrímskirkja Church and its jagged greyish columns on both sides of the church.

From the beach, there is a view to the Reynisdrangar sea stacks sitting off the shoreline. According to Icelandic folklore, the sea stacks originated when two trolls dragged a ship to shore unsuccessfully and when dawn broke, the trolls turned into solid stone.

Nearby is the Dyrhólaey peninsula, 120 metres high with a rock arch, sea stacks and a lighthouse. The views on clear days stretch into the distance in every direction – with the big glacier Mýrdalsjökull to the north, Reynisdrangar to the east and vast coastline to the west. From May to August, Dyrhólaey is one of the best places to see Atlantic puffins nesting on the cliff faces and sea stacks. 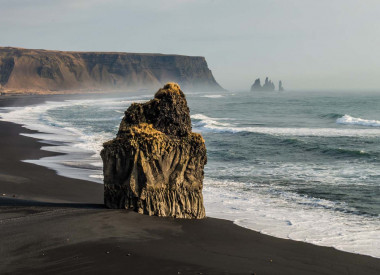