Situated 25 kilometres southwest of Brașov, Bran Castle, or Dracula’s Castle, is arguably the main highlight of Transylvania – and Romania!

The first structure was a wooden church from 1212, built by the Teutonic Knights of German order. In 1377, Hungarian King Louis the Great allowed the people of Brașov to build a stone castle on the site. Completed in 1388, the Castle served the role of a defensive fortress and a customs post – it stood on the border of Transylvania and Wallachia. Its strategic location meant it was successfully used in defence against the Ottoman Empire.

After Transylvania became part of Romania, in 1920 Bran Castle became a royal summer residence within the Kingdom of Romania. It became the favourite home and retreat of Queen Marie of Romania. The castle was inherited by her daughter Princess Ileana who ran a hospital there in the Second World War. It was later seized by the communist regime with the expulsion of the royal family in 1948 and only in 2009 was the castle fully returned to the possession of its legal heirs, the Habsburg family.

Vlad III, better known as Vlad the Impaler or Vlad Dracula, was ruler of Wallachia between 1448 to 1476. Known for committing violent and brutal acts of war, Vlad the Impaler is also known as the inspiration for Bram Stoker's titular character in the novel Dracula. Although Bram Stoker never visited Romania, he depicted the imaginary Dracula’s castle based upon a description of Bran Castle. In Chapter 2, he describes the Count’s castle as ‘…on the very edge of a terrific precipice…with occasionally a deep rift where there is a chasm [with] silver threads where the rivers wind in deep gorges through the forests.” Bran Castle is indeed located on a precarious rocky hilltop overlooking a flowing river in Transylvania.

The current connection between Bran Castle and the Dracula legend (both Vlad III Dracula and Bram Stoker’s novel) is driven by tourism. In the 1970s, in an attempt to develop a closer relationship with the West, the Communist Party of Romania began to focus on selling Romania as a tourist destination. Because of the convenient location of Bran Castle, in-between Bucharest and Brașov, its dramatic architecture, location and its mythical connections to the Dracula legend, Bran Castle was marketed as the ‘real Dracula Castle’ 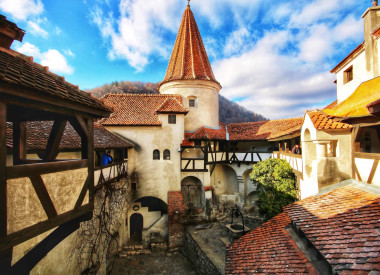