A short distance outside of the town is the Zărneşti Gorge. Shrouded in pristine pine forests, this is the perfect area for the European Brown Bear population to thrive. It is possible to see the bears at the Libearty Bear Sanctuary Zărneşti. It is the biggest brown bear sanctuary in Europe with over 130 brown bears rescued from circuses and small cages. The bears have found a much better life here, living in 69 hectares of oak forest in the Carpathian Mountains.

Most of the bears living in the sanctuary were found suffering around the country where they had been used as pets or attractions for restaurants, hotel and petrol stations. The bears were all caught from the wild as cubs and had lived all their lives confined to cages with a poor diet and little or no veterinary care. Thankfully, the ownership of bears became illegal in 2005.

None of the rescued bears  in Libearty would be able to live in the wild again as they lack the natural skills they need to survive. But the life they have in Libearty is the closest thing to being wild bears - climbing trees, swimming in pools and foraging on the forest vegetation.

Libearty has helped to create better awareness of the ethical treatment and issues of brown bears in Romania and beyond. They regularly carry out educational programs and help schools organise trips to the sanctuary.

A tour is guided by a trained animal welfare expert from Libearty who will share the stories of the bears now living in the sanctuary. 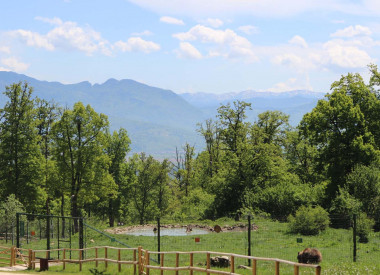