The journey to Brașov is approximately three hours from Bucharest with several key points of interest en route, including the fairy-tale Peleş Castle, nestled at the foot of the Bucegi Mountains in the picturesque town of Sinaia. Commissioned by King Carol I in 1873 and completed in 1883, the castle served as the summer residence of the royal family until 1947. Built in the neo-Renaissance style, its 160 rooms are all lavishly furnished and decorated with fine examples of European art. There is also an impressive armoury, filled with over 4,000 pieces of weaponry from Europe and Asia.

Nearby is Sinaia Monastery, founded in 1695 by Prince Mihail Cantacuzino and named after Mount Sinai in Egypt. The site contains two churches, the Old Church built in 1695 and New Church built in 1846, both built in the authentic ‘Brâncovenesc’ style, a local Romanian architectural style from the 17th century and the early 18th century. 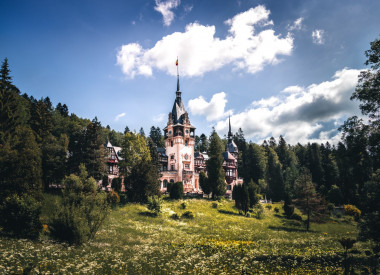