The 12th century Saxon city of Sibiu is one of Romania’s most beautiful cities, affectionately dubbed ‘The City with Eyes’ owing to the unique window vents that adorn many of the houses on the south and east sides of the city. These cartoonish features create the illusion that the houses are watching you and can be dated back to the 15th century.

Other than the famous ‘eyes’ Sibiu exhibits a diverse architecture representing late Renaissance, early gothic, classical and Transylvanian baroque. At its centre are the three interlocking squares full of medieval charm and a pedestrianised main street. The city straddles the Cibin River and lies some 275 kilometres northwest of Bucharest. Aside from the famous eyed-roofs, the city is well-known for its culture, history and gastronomy. 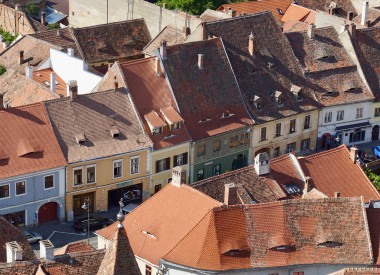