Agrigento is situated on Sicily’s southern coast and is home to the UNESCO-listed Valley of the Temples, an archaeological site encompassing the ruined ancient Greek city of Akragas.

Inside the Valley are 7 well-preserved temples all in Doric style, dating back to the 5th and 6th centuries BC. Now excavated and partially restored, they constitute some of the largest and best-preserved ancient Greek buildings anywhere in the world.

The Temple of Concordia is probably the largest and best-preserved Doric temple in the world, having not suffered the damaging effects of time. Built in 430 BC, this Temple owes its longevity to the fact it was transformed into a Greek Orthodox Church in the 6th century AD, which helped it survive the destruction of pagan places of worship during the late Roman Empire. It is almost entirely intact – only its roof is missing.

The Temple of Heracles is the most ancient in the Valley, dating to the 6th century BC. It was destroyed in an earthquake and today only consists of 8 columns.

The Temple of Hera or Juno was built around the year 450 BC with 30 standing columns remaining today, but it was destroyed in a fire when Akragas was conquered by the Carthaginians in 406 BC.

The Temple of Olympian Zeus was the most grandiose Doric temple of the ancient world as it was built around 480 BC to celebrate Akragas’ victory over the Carthaginians but it was never fully completed. Not much is left today, the most unique remains being the colossal atlases, stone figures that would have originally stood upright at some 7.5 metres high, but now lie on the ground. 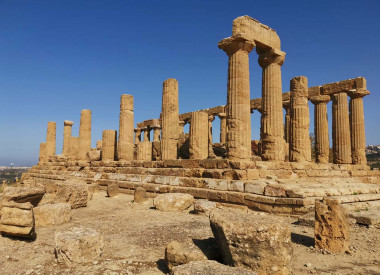 Temple of Juno, Valley of the Temples, Agrigento