Towering over the western coast of Sicily at 800 metres above sea level is Erice, a medieval hilltop town. On a cloudless day, Erice offers stunning views of the Tyrrhenian and Mediterranean coastline, the salt pans and sprawling city of Trapani.

Erice is surrounded by defensive town walls and crowned by two castles. The Venus Castle was built in the 12th century by the Normans on top of the ancient Temple of Venus, dedicated to the Roman goddess of the same name. On the rocky slopes of mountain is Pepoli Tower, a fairy-tale castle built by the Saracens in a medieval and Moorish style.

Erice was founded by the Elymians, a native Sicilian people who also built the nearby town and temple of Segesta. After the Greeks, Carthaginians and Romans, Erice was later ruled by the Arabs and Norman rulers of Sicily. Like so many Sicilian towns, it passed from one invader to another, leaving behind their architectural and cultural footprints. The ancient Greek name for the town was ‘Eryx’, while the Arabs named it ‘Gebel Hamad’ and the Normans ‘Monte San Giuliano’. In the 1930s, the town became one of several in Italy to be renamed under Benito Mussolini in honour of its ancient past. Formerly Eryx, the town became Erice in 1934.

Navigate through a maze of cobbled streets and archways where you can find over 60 churches as well as souvenir shops and eateries. Erice is famous for its almond biscuits and pastries, proudly stacked up in the windows of several pasticcerie. 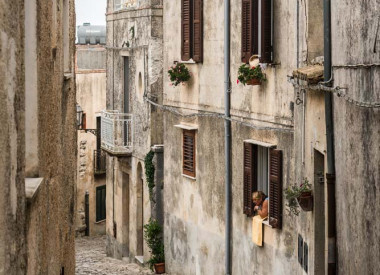