The seaside town of Giardini Naxos is set on the eastern Sicilian coast, in a wide bay overlooked by Mount Etna. The town has grown from a sleepy fishing village into a popular resort, with a long parade of hotels, bars, pizzerias and souvenir shops strung along the beach. Giardini Naxos’ beach is made up of sand and pebbles, with a free area where you can use the sunbeds, umbrellas and also a lido area you can pay around €16 to use.

A short 20-minute bus ride from Giardini Naxos is the town of Taormina. Idyllically perched on a slope high above the Ionian Sea, Taormina is a picturesque small town known for its preserved medieval streets, archetypal Mediterranean atmosphere and dramatic views of Mount Etna. Although it is now rather touristy, it still retains much of its charm.

The highlight of Taormina is the impressive Greek-Roman theatre dating from the 3rd century BC. It is the second largest theatre of Greek origin in Sicily (the largest is in Syracuse). Suspended between sea and sky, the views from the theatre are spectacular, with Mount Etna in the distance and the sparkling blue Bay of Naxos down below. 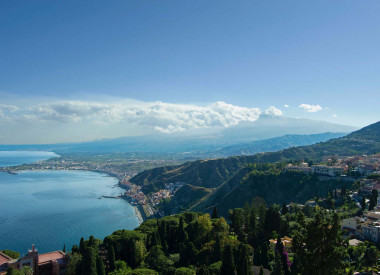