Mount Etna is the highest and most active volcano in Europe. Towering above the city of Catania on the east coast of Sicily at 3,326 metres, Etna has been growing for about 500,000 years and has documented records of eruptions dating back to 1500 BC. The volcano is almost in a constant state of activity and eruptions occur frequently, most spectacularly from the five summit craters, but more often from the fissures and old craters on the mountain's flanks.

Since 1987, the national Parco dell'Etna encompasses Etna and its slopes over an area of 581km2. The park’s landscape is extremely varied, with snow-capped peaks and lunar deserts of barren black lava near the top, forests of pine, beech and birch trees in the middle and thriving olive groves and lush vineyards near the base.

There are two ways to visit Mount Etna. The road takes you to 1,900 metres where you can explore the lunar landscape. Alternatively, there is a cable car up to 2,500 metres and a special 4x4 vehicle can reach an altitude of 2,950 metres to get closer to the impressive craters.

The rich soil on the slopes enabled excellent wine production and most wineries are located on the north-eastern flank of the volcano. Enjoy a tasting of both white and red wines at one of Etna’s acclaimed vineyards, with views overlooking the coast. 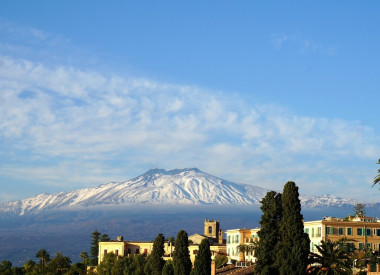