The Sicilian capital of Palermo has a strategic location at the heart of the Mediterranean. As a result, the Phoenicians, the Carthaginians, the Greeks, the Romans, the Arabs, the Normans, the Swabians, the French, the Aragonese and the Bourbons have left their mark on the city. Palermo’s quilted history is evident in the vast range of architectural styles, namely Byzantine, Arabic, Baroque and Norman.

Since its completion in 1185, Palermo Cathedral has seen centuries of successive foreign rulers, who have all added their own architectural mark onto the cathedral. The most interesting is the Quran verse inscribed on the Roman column of the entrance, and how this column and its Islamic engraving became a supporting pillar of the right Gothic portico of a cathedral dedicated to the Assumption of the Virgin Mary is a mystery. Inside the Cathedral are the royal Norman tombs and the treasury which showcases the gold gem-encrusted 13th century crown of Constance of Aragon. The Cathedral forms part of the nine Arab-Norman UNESCO World Heritage Sites, due to its syncretism between Western, Islamic, and Byzantine cultures.

Also part of the Arab-Norman UNESCO sites is the Norman Palace and Palatine Chapel. The Palace was the seat of the Norman kings of Sicily and is the oldest royal residence in Europe. It dates back to the 9th century where it was an Arabian palace for the Emirate of Palermo, but in the 12th century the Normans transformed the palace. In 1132 King Roger II added the opulent Palatine Chapel, one of the best examples of the Arab-Norman-Byzantine style that prevailed in 12th century Sicily. Its glittering gold Byzantine mosaics are complemented by the wooden muqarnas ceilings, an Arabic-style honeycomb carving. The mosaics detail stories from the New and Old Testaments, and the most impressive mosaic is of Christ Pantocrator surrounded by eight angels in the cupola. With gold, mosaics and marble covering its every inch, the Chapel reflects Norman Sicily’s cultural complexity.

Palermo’s historical ties with the Arab world and its proximity to North Africa are reflected in the city’s colourful souk-like markets. The ancient outdoor markets of Ballarò, Capo and Vucciria are the most prominent when it comes to historical charm. All three are bustling with noisy street vendors, strong aromas of sizzling street food and splashes of vibrant colours. Enjoy some of the city’s best street food, including pane e panelle, Palermo’s famous chickpea fritters or crochhè, potato croquettes flavoured with fresh mint.

Monreale is a historic hill town located outside Palermo, known for its awe-inspiring mosaics in the town’s Norman cathedral. Built in 1174, the Monreale Cathedral is one of the richest examples of Byzantine-Norman architecture. The upper part of the cathedral’s interior is completely covered in gleaming gold mosaics; over 6,500m2 of swirling golden mosaics depict biblical scenes, saints, kings and angels. Wave after wave of glistening gold culminate in an immense representation of Christ Pantocrator above the altar. Next to the cathedral are the cloisters of the Benedictine monastery, also dating back to the end of the 12th century. The cloister comprises 216 ornate marble columns, some carved with biblical scenes and motifs and others ornamented with mosaics – no two columns are the same. 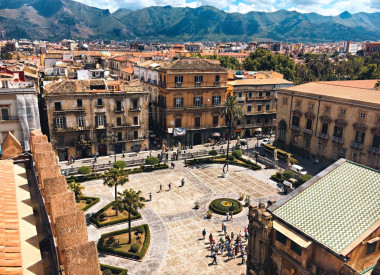