In the hills of northwest Sicily is the magical archaeological complex of Segesta. Founded by the Elymian people, an indigenous population of Sicily, Segesta was an important classical town. It was later ruled by the Greeks and Romans, but its importance declined before being abandoned in the 13th century.

The Doric Temple of Segesta was not actually built by the Greeks, but by the Elymians in 420 BC. Though roofless and never completed, the beautiful golden temple is one of the best-preserved Greek structures anywhere. It has 36 Doric columns and is 61 metres long and 26 metres wide.

A shuttle bus up the hill takes you to the Greek (and later Roman) theatre, set on top of a mountain plateau, with stunning views of the theatre with the backdrop of unspoiled rolling green countryside. 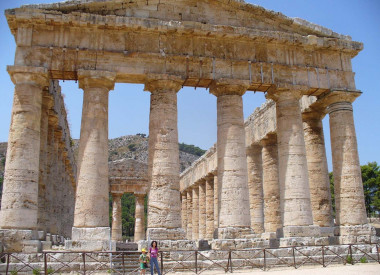