Located in the southeast corner of Sicily on the Ionian coast, Syracuse is built on an ancient Greek settlement founded by the Corinthians in 734 BC. Once one of ancient Greece’s most important cities, the Romans, Vandals and Normans ruled here after the Greeks. More than any other city in Sicily, Syracuse’s ancient Greek past is still visible today. The entire city of Syracuse, including the Neapolis Archaeological Park, is a UNESCO World Heritage site.

The historic centre of Syracuse is on the small island of Ortigia. The Greeks, Romans, Arabs, Swabians, Byzantines, Normans, Angioins, Aragonese and Bourbons have all called Ortigia home, making this little island an incredible crossroads of cultures and civilisations.

In front of the Piazza Pancali is the Temple of Apollo, considered the oldest Doric temple in Sicily having been built in the 6th century BC. Nearby are the enticing sounds and smells of the ancient Arab market, with colourful stands of fruit and vegetables, almonds and pistachios, strawberries, artichokes and pomodori pachini (a type of local tomatoes).

Rising up from the middle of the strikingly beautiful Piazza del Duomo is the Cathedral of Syracuse. Originally built as the Temple of Athena in the 5th century BC, the Cathedral boasts massive Greek Doric columns and an imposing Baroque façade. Inside the church it is possible to admire parts of the original Greek temple and a number of relics of Saint Lucia, the patron saint of the city.

Down the hill from the Piazza del Duomo, towards the sea, is the Fountain of Arethusa. In Greek mythology, Arethusa was a nymph who fled from her home in Arcadia beneath the sea and came up as a fresh water fountain of the island of Ortigia. In fact, the area is rich in spring waters and this was likely one of the reasons that led the first inhabitants to settle here. The Fountain and shoreline are overlooked by a row of restaurants and cafes with beautiful views out to the ocean.

The Neapolis Archaeological Park contains the city’s most important Greek and Roman ruins. The Roman amphitheatre is one of the largest amphitheatres ever constructed and dates back to the 3rd century AD. The amphitheatre here was used primarily for violent Gladiator contests and wild animal hunts. Although the amphitheatre is not as well preserved as its Greek neighbour, it is still impressive.

A short walk from the Roman amphitheatre is the Greek theatre built in the 5th century BC. Unlike the Romans, the Greeks used their theatre for a more civilised form of entertainment: plays, tragedies and circus performances. It is one of the largest theatres ever built: its 67 rows could accommodate up to 15,000 spectators (more than three times its current capacity).

The Latomia del Paradiso was an ancient limestone quarry from which ancient Syracuse was built. Inside the quarry is the fascinating Ear of Dionysus cave. Because of its ear shape, the cave has remarkable acoustics, amplifying the sounds inside it. According to legend, the tyrant Dionysus I of Syracuse (432-367 BC) used the cave as a prison for political dissidents so he could eavesdrop on their plotting. Another more gruesome legend claims that Dionysus carved the cave in this shape so it would amplify the screams of prisoners being tortured.

45 minutes southwest of Syracuse is the beautiful town of Noto, known as the capital of Sicilian baroque architecture. The medieval town of Noto was virtually destroyed by the 1693 Sicilian earthquake. This led to the town having a unique architectural homogeneity, since the whole town was rebuilt in the Sicilian baroque style in the early 18th century. One of Noto’s most unique features is the typical golden-honey colour of its buildings. The principal building material used was local limestone, which absorbs the sun’s rays and transforms them into a sparkling gold-like colour. This beautiful small town has a historic centre that consists almost entirely of limestone Baroque palaces, churches and buildings. The effect at sunset is impressive.

Visit of the stunning Noto Catherdal, a UNESCO World Heritage Site. The cathedral overlooks the main square from its impressive position at the top of a wide staircase. The exterior is of pale yellow limestone, in typical late Baroque style yet with some neoclassical elements. The interior is simply painted white, as the 18th century interior decoration was destroyed after collapses due to earthquakes over the years.

Corso Vittorio Emanuele, Noto’s main street, is the heart of the city that holds the essence of the Sicilian Baroque.  Stroll past magnificent churches and beautiful buildings along this street lined with restaurants, cafes and shops. 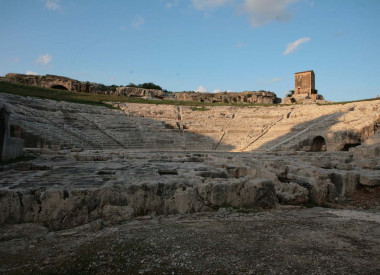