Outside the town of Piazza Armerina is the Villa Romana del Casale, the ruins of an imperial Roman villa that contains the largest, richest and most complex collection of late Roman mosaics in the world. Historians believe the villa was built in the 4th century AD and was owned by a member of the Roman provincial aristocracy, possible a governor, at the time.

Following the fall of the Roman Empire, the villa was fortified in the 5th century and grew to become a large medieval settlement. The villa was abandoned in the 12th century after a landslide and lay under 10 metres of mud for some 700 years, protecting it from the damaging effects of the elements.

The villa was excavated in the mid-20th century and revealed extensive examples of Roman mosaics spread over 3,500m2. The mosaics were likely to have been created by skilled North African artists and show varying themes, styles and narratives. Through these mosaics, you can retrace the history of the Roman Empire with scenes of everyday life, depictions of heroes and mythical gods, Homeric escapades, hunting scenes and games.

The Ambulatory of the Big Hunt is one continuous corridor mosaic that runs 60 metres from one side to the other. It tells story of the Roman Venatio, where wild animals were captured from distant parts of the empire and fought in amphitheatres for entertainment purposes. The vivid mosaics show armed hunters pitted against exotic wild animals, including tigers, ostriches, elephants and rhinoceroses, all destined to be shipped to Rome. 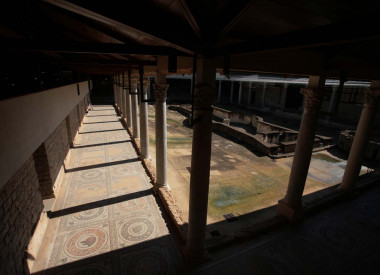