The capital of Slovenia, Ljubljana is situated in the heart of the country, and with a population of just under 300,000 people, is one of the smallest capitals of Europe. The city sprawls over the banks of the River Ljubljanica and boasts a rich medieval heritage, as well as a wonderful selection of renaissance, baroque and art nouveau buildings. The Old Town is a veritable feast of masterworks by the venerated architect Jože Plečnik amongst which are the iconic Triple Bridge, the Slovene National and University Library, the embankments along the Ljubljanica River and the bustling Ljubljana Central Market, where you can sample a huge variety of fresh produce. Overlooking the city is the castle which can be reached via a moderate uphill walk or a funicular ride. This is the perfect place to enjoy the stunning panoramic views of the city.

Equally stunning views can be attained from a completely different perspective when taking a river cruise of the city along the winding river that cut through the centre of the city.

The dragon is the symbol of Ljubljana and this is best exemplified in the Zmajski Most (Dragon Bridge) which was built in 1901.

The city boasts a lively nightlife, helped by a student population of some 50,000, and is emerging as one of Europe’s top culinary destinations with award-winning restaurants and Michelin star eateries scattered throughout the city. It is also one of Europe’s greenest and most liveable cities – cars are banned from the pedestrianised banks of the Ljubljanica River which becomes thronged by terraces set up by cafes in the summer months. 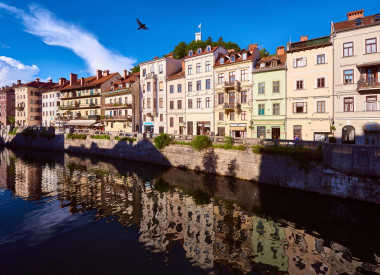