Situated on a narrow peninsula, Piran is one of the best-preserved Venetian-style towns on the Adriatic. Explore the winding cobbled streets of the former walled city, its hidden plazas and indulge in fresh seafood at one of the myriad restaurants overlooking the Gulf of Piran. A cruise from one of the nearby towns is recommend to fully appreciate the Gothic architecture and beauty of the town, now known as the Pearl of the Slovenian seaside.

The town flourished due to the production of world-class fleur de sel ‘flower of salt’, which can be attributed to Piran as far back as 804. Indeed, the same age old techniques are still in use today and can be discovered at the Sečovlje Salt Pans. Salt was an imperative substance as an essential cooking ingredient as well as its preservative qualities and even became a source of currency for trading slaves. Piran’s status grew within the Venetian Empire, and town walls (some of which remain today) were erected for protection from enemy invasion, prevent fires and plague outbreaks within the city. 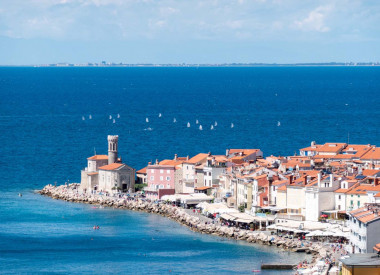