Slovenia has several large cave systems dotted throughout the country the most popular of which are the Postojna Caves located approximately halfway from Lake Bled to the coast. The karst cave system is just over 24km long and is considered to be one of the world’s most beautiful. A 3.7km electric train journey takes you into the depths of the caves where you can explore on foot and marvel at the size of the open chambers and the oddly shaped stalagmites and stalactites created naturally over the centuries. During the tour you ascend to the summit of the Big Mountain Hall, see the magnificent Brilliant stalagmite, witness the great acoustics of the Grand Hall and meet the famous 'Baby Dragons', the cave salamander, who live inside this subterranean paradise. 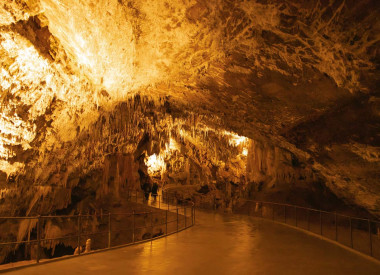