Despite its population of 2 million inhabitants, the busy, modern and industrious city of Manaus is dwarfed by its natural surroundings. It is located at the confluence of two great Amazon rivers, the Rio Negro and Rio Solimões, 1,600km from the Atlantic Ocean. During the rubber boom of the nineteenth century, Manaus became the wealthiest city in South America. Today it is one of the most important points of access into the rainforest, and continues to grow thanks to the burgeoning motorcycle and electronics industries, and agriculture. From Manaus’ floating dock, boats of differing sizes depart regularly for various destinations in the forest. Most journeys will take multiple days: Manaus is a 7 day unique riverboat journey from Tabatinga on the Peruvian border, and 5 days from Belem on the Atlantic coast.

During the era of the rubber boom, wealthy plantation owners transformed Manaus into a city of decadence and opulence. The best-known attraction in the city centre is the ornate opera house, the Teatro Amazonas, built from materials imported from Europe and designed in line with the European fashion of the time. At the beginning of the twentieth century, Manaus was a city of elegant mansions, leafy promenades and a tram system. It was the second city in Brazil to receive electricity. The decline of the rubber industry signalled a period of recession and degeneration in Manaus, and only recently has the city begun to prosper once more. Nowadays, some of the historic buildings in the city centre have been restored, whilst others remain in a state of decay.

Given its significant past, Manaus’ historical centre is an interesting place to explore. The opera house is by far the most popular site to visit: there are music, theatre and dance performances most weekends (many of them free) and sometimes when visiting during the day you will be lucky enough to find the city orchestra rehearsing. The Customs and Governor’s Houses are also worth visiting; both are good places to feel immersed in the story of the city’s past. The bustling waterfront area is perhaps the most engaging part of Manaus. There, city dwellers haggle for fresh produce in the fish market, where you will see species such as the giant pirarucu, which grows up to 3 metres in length. Beside the market, the scent of grilled piranhas fills the air, whilst across the road, hundreds of locals swarm around the colourful floating dock, loading Amazon riverboats full of supplies to be transported out into the vast rainforest. The Mercado Municipal Adolfo Lisboa is a short walk away, a market built initially in 1882 from European stonework and wrought iron. Here you will find herbal remedies and potions of all kinds, as well as Amazon handicrafts. A short boat ride from Manaus is ‘the meeting of the waters’, the point where the dark water of the Rio Negro meets the sandy-coloured Rio Solimões and the two rivers run alongside each other for kilometres without merging. Speedboat transfers to Amazon lodges often stop to allow tourists to witness this phenomenon, caused by the difference in temperature, speed and density of the rivers. 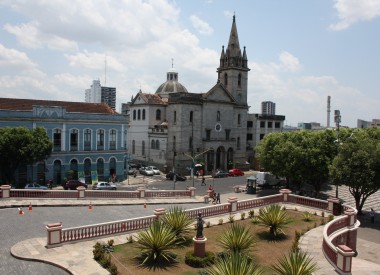