Located in an enviable setting by a large natural harbour, Salvador was colonised by Portuguese merchants in the early 16th century and was at the heart of the flourishing sugar trade, which accounted for almost all of Brazil’s exports between 1600 and 1650. Salvador was Brazil’s first capital city until 1763, when power shifted south to Rio de Janeiro. Although the north has never regained the status it once enjoyed, Salvador is now the third most populated city in the country and is a cultural hub.

Salvador is home to many of Brazil’s biggest musical groups, such as Olodum, a percussion group which promotes pride among young Afro-Brazilians through social projects. The city is the home of samba, and the birthplace of the singer turned politician Gilberto Gil. Although the Rio carnival is more widely recognised, Salvador is in fact host to the biggest annual street carnival in Brazil, when the city explodes in a riot of colour, music and dance. The mesmerising martial art of capoeira, which is accompanied by music and includes quick, acrobatic kicks and spins, also has its roots here.

Salvador’s unique and thriving cultural scene originates in the colonial era, when millions of men were brought from Africa to Brazil to work as slaves on the sugar plantations. The influence of these early African communities is strongly felt in the state of Bahia: the African Candomblé religion is still practiced and much of the local folklore centres on Candomblé dieties, known as orixás. In the markets of Salvador, you are able to browse rows of garments, jewellery, figures, herbs and food used in Candomblé ceremonies. Often Candomblé and Catholic practices merge, such as at the Church of Bonfims, a prominent pilgrimage site in Salvador.

Bahian cuisine is some of the best in Brazil, using African ingredients such as dendê palm oil, as well as seafood, coconut, fresh coriander and hot chillis. Traditional dishes include the street food favourite acarajé, a dumpling fried in dendê oil and stuffed with beans and shrimps, and moqueca, a slow-cooked seafood stew including coconut milk, tomatoes, onions, coriander and dendê, which is served with farofa (flour made from the manioc tuber). For dessert, try cocadas, a sweet with fresh grated coconut, which is found in various forms around Latin America. Fresh juices and ice creams made from the wide range of fruits found in Brazil are also delicious.

The city centre is split onto two levels. The commercial area, harbour and docks are in the lower city, as is the Mercado Modelo, a market with handicrafts, typical produce from the region and eateries. The market is housed in a neo-classic style building which was once a custom house and later an important food market. The building has been plagued by fires and has been rebuilt on several occasions, the last time being in 1984. A short walk from the Mercado Modelo, the Elevador Lacerda is a modern lift connecting the lower and upper parts of the city. The main tourist draw in the upper city is the historic district of Pelourinho. 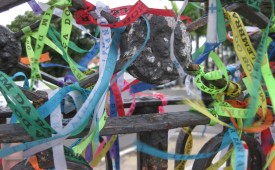 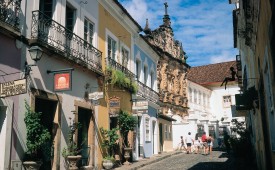