Ecuador’s central valley is flanked by several high volcanoes, and the 18th century German explorer Alexander Von Humboldt gave the valley the name ‘Avenue of the Volcanoes’. The road between Quito and Riobamba runs along the valley, and offers wonderful views of the surrounding countryside and passes through traditional towns.

The impressive volcanoes passed on the route include Cotopaxi, a perfect snow-capped cone, the twin peaks of the Illinizas, and Chimborazo, Ecuador’s highest mountain, the summit of which is the furthest point from the centre of the earth. Both Cotopaxi and Chimborazo lie within national parks. Tungurahua, close to the town of Baños, has been highly active recently, with several eruptions throwing up large clouds of ash.

The towns in the central valley are famous for their markets. Latacunga, the main town between Quito and Riobamba, has a Tuesday and Saturday market. Probably the most important and colourful market in the valley, however, is the Thursday market in Saquisili. There is a large animal market, as well as fruit and vegetables. Guamote, south of Riobamba, also has a colourful Thursday market, with very few tourists. 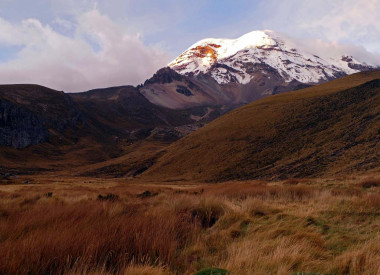 Chimborazo, Avenue of the Volcanoes, Ecuador

View all holidays visiting Avenue of the Volcanoes View all