Five hours south of Cancún and just across the border from Belize, Bacalar is a magical site (in 2006 the town was officially recognised as one of Mexico's Pueblos Mágicos, or Magic Towns) in the Quintana Roo region of the Yucatán Peninsula. An important commercial trading town during Mayan times, its charm now resides in pretty fishermen's houses, breathtaking sunsets and of course the famous lagoon where activities include snorkelling, diving, kayaking and boat trips to areas full of lush mangroves and swimming spots.

Stretching across 42km from north to south and less than 2km at it's widest point, Bacalar’s namesake lagoon shimmers with different hues of blue and green, due to the limestone bed found at the bottom of the lake. The long, thin lagoon has organisms which could help decipher the origin of life and the secrets left by pirates during the 17th and 18th centuries: the stromatolites. Along the crystalline fresh water canals, there are mangroves which serve as a filtration system and one of the world’s most productive ecosystems, feeding and breeding fish, birds and other marine life. Fed by underground rivers, much like the cenotes (natural wells) typical of the Yucatán region, the lake also offers the chance to utilise its therapeutic limestone sediments that settle to the bottom of the shallower parts of the lake, so you can indulge in a natural spa treatment and exfoliate in the mineral muds.

Fort San Felipe is a fascinating intact site where Mexicans fought off pirates, as well as being a classic example of Spanish military architecture. Bacalar is also close to several important Mayan archaeological sites, where you can learn more about their fascinating culture. 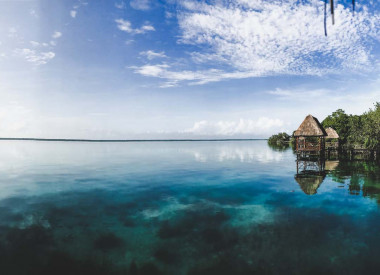