The most visited part of the canyon is the Cruz del Condor, where the river is almost 1,500m below the lookout point, and 3,400m below the surrounding peaks. These mountains, normally covered in snow, form a spectacular backdrop for the condors, which glide by on the thermals rising from the canyon. It is for the condors that many tourists visit the canyon, and there can be few places in the world that offer the chance to see these birds at such close quarters.

The condor is a carrion eater and feeds on dead animals. It does not kill animals itself, and would be unable to lift off live animals, as its claws do not permit it to grasp prey. The condor nests in the steep cliff-faces around the Cruz del Condor, and lays one or two eggs a year, which are approximately 11cm long. Young condors have brown feathers, which change to black at around eight years of age. At this point the condor also develops a white collar and white markings on the wings. It is possible to distinguish the male bird by its fleshy crest. Condors have been known to live to 50 years old. The condor can weigh up to 12kg and its wingspan is often in excess of three metres. 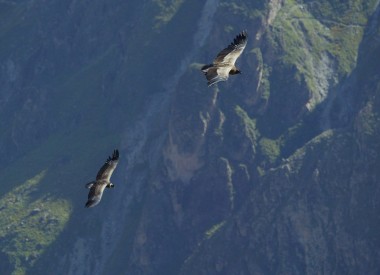