The best known of all the archaeological sites near Cusco, Sacsayhuaman is also the most interesting. The ruins stand on a hill to the north of Cusco, which offers a splendid view over the city. The Cristo Blanco (White Christ) is next to Sacsayhuaman, and was a gift from the Palestine Arabs to the people of Cusco. Sacsayhuaman is generally referred to as a fortress, and although it was used to attack the Spanish in Manco Inca's rebellion, it is unlikely that this was its original, or main, function. It is more likely to have been a ceremonial centre, possibly the Royal House of the Sun, and there were places of devotion to the moon, lightning and the stars.

The site is still awe-inspiring, despite being destroyed and plundered as a quarry by the Spanish conquistadors. The most impressive elements are the enormous zigzag walls that defended the southern part of the site. Each of these three walls stretch for 300m and is almost 10m tall. The stones in the walls are incredible, the largest of which weigh over 300 tonnes. Nevertheless, they are fitted with usual Inca perfection reserved for important structures and these walls are some of the most impressive structures in all of Peru. Atop of the hill defended by these huge walls there used to stand three huge towers, which were used in the defence of Sacsayhuaman by Manco Inca in 1536. Unfortunately, all that can now be seen are the bases of the towers, as the structures themselves were destroyed by the Spanish when they took the site after defeating the Incas.

Opposite the giant walls is a hill with some impressive carvings in the rock. This includes the so-called Inca's Throne: seat-like structures overlooking the site. Behind this hill are some natural slides in the rock, and a number of other Inca structures. These include a large, circular reservoir, now empty, and the ‘chincanas': tunnels in the rock. If entering these tunnels be careful as they are very dark and it is not unknown for thieves to lurk. These tunnels form part of a reputedly enormous series that originally linked Sacsayhuaman to Qorikancha in Cusco, as well as many other tunnels throughout the Inca Empire. It is said that when the Incas discovered that the Spanish had killed Atahuallpa, they hid many treasures in these tunnels, which were blocked up. There are rumours of people who have entered the chincanas looking for treasure, only never to reappear.

The exact meaning of the name Sacsayhuaman is unclear. The Cusqueñan historian Luis Pardo claims that the name comes from the Quechua words Saqsay and Waman, meaning satiated falcon. Santiago Astete, a specialist in Quechua, claims that the name comes from the words Saqsa and Uma, meaning speckled head. This version fits in with the theory that Cusco was designed by Pachacuteq in the form of a Puma, and that Sacsayhuaman was its head. The actual builder of Sacsayhuaman is unclear. Some attribute it to the great Inca leader Pachacuteq. Others think that it was his son, Tupac Yupanqui, who realised the structure, following his father's plans. The sheer size of the site makes it unlikely that the site was the work of only one Inca, and it was probably still being built during the period of Huayna Capac, the last Inca before the civil war between his sons Huáscar and Atahuallpa. It appears that Sacsayhuaman was never completed, even after 20,000 men had worked on the site for 50 years.

The site was scene to possibly the most famous battle between the Incas and the Spanish. Manco Inca, the Inca leader the conquistadors had installed after executing Atahuallpa, realised that the situation was untenable and he rejected the position he had been given in order to lead an Inca army against the Spanish. The Inca army took the site of Sacsayhuaman and began to attack the city of Cusco and the Spanish inside, setting fire to the thatched roofs by raining down fiery stones on the city. The Spanish, led by Francisco Pizarro's brother, Juan, escaped from the city and attacked Sacsayhuaman. Although Juan Pizarro was killed in the attack, the Spanish managed to scale the giant walls of the fortress with ladders and attack the towers. The battle was very violent, with heavy casualties on both sides. It is said that an Inca general, Cahuide, fought particularly bravely, defending the last tower before the Spanish captured it. Rather than be captured himself, he leapt from the tower to his death.

After the Spanish captured Sacsayhuaman, the Incas retreated to the jungle and were all but defeated. The Spanish then used Sacsayhuaman as a prison in the struggle for Peruvian dominance between the Pizarro and Almagro factions. It was also the place where the revolutionary Tupac Amaru II was captured, before being executed in Cusco's Plaza de Armas. 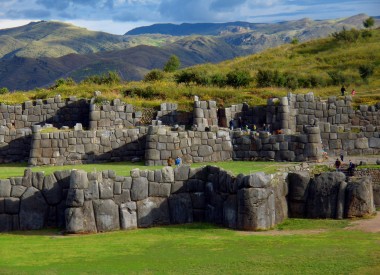