Puno is the best base in Peru for visiting Lake Titicaca, being the largest city on the lake's shores. It has excellent services, with good hotels and restaurants, and the different attractions in the area are easily accessible.

There is not much to see in the city of Puno itself, although there are a couple of items of interest if you have some free time in the city. The Plaza de Armas and the Cathedral are of minor interest, as is the Balcón del Conde de Lemos, a colonial wooden balcony. Opposite the balcony is the Museo Municipal Carlos Dreyer, which has an interesting collection of ceramics and a few stone monoliths.

The Yavari is an old steam ship that used to work on the lake. It is currently under restoration, and it is hoped that it will start offering services again when it is fully restored. Meanwhile, it is a museum that can be visited. The ship was built in England in 1862 and was transported to Arica, then part of Peru. From Arica, the ship was taken piece by piece by mule to Lake Titicaca, where it was assembled. The ship finally took to the waters of Lake Titicaca in 1871. Due to sailing in fresh rather than salt water, the ship has not suffered rust damage, and so when it is relaunched it will be one of the oldest steam ships in the world still in operation. The ship is berthed next to the Posada del Inca Hotel.

Apart from the lake, Puno is famous for the incredible Virgen de la Candelaria festival held in the city during the first two weeks of February. This is one of the largest, and liveliest, festivals in all of the Andes, with people dancing in the streets, wearing the most wonderful masks. This is the highlight of the year for many Puneños, and if they are named godfather of their district, they will save all year to ensure that they have enough food and drink to offer everybody. 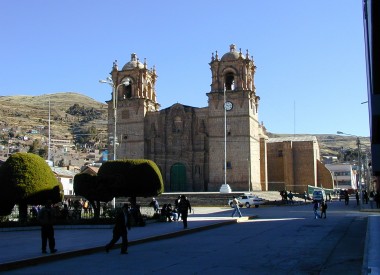