The most famous islands on Lake Titicaca are the floating islands of the Uros. These artificial islands are made by tying together totora reeds, which grow in the lake, to create the base of the islands, as well huts, furniture and boats. The totora reed is undoubtedly the life stay of the islanders, even serving as food, as the tip of the reed can be eaten. The islands are anchored to the bed of the lake, which is only 4m below the surface, to stop them floating away. The islands have developed somewhat in recent years, and there is now a hospital, a school a hotel and even electricity on some of the islands. There are 45 floating islands in total, most of them relatively close to Puno, of which about 60% are visited by tourists.

The origin of the islands is uncertain, and there are two main theories. The first claims that the Uros people were unhappy with being dominated by the Incas, and did not appreciate their hard work ethic. Therefore, they escaped from the mainland to live on the lake, creating the artificial islands. The other theory claims that the Uros fled to the lake when the Spanish arrived and forced the indigenous population to work in the mines. Either way, the islands were likely to have been formed in the 16 th century, around the time of the Spanish conquest. Why they chose artificial islands rather than real ones is unclear, although it is likely that the larger islands were all inhabited already.

There is a common theory among some travellers that the islands now simply exist for tourism, and that the visiting the islands is no more authentic than visiting Disney World. However, although it is true that tourism has had a large impact on the life of the islanders, the perception that the islands are just a tourist attraction is erroneous. After all, 40% of the islands do not receive any tourists. Many of the islanders still live using traditional customs, and fishing is the most important activity for them, with the daily catches being sold in the market in Puno. When you visit the Uros, you will notice that there are mostly women and children on the islands. This is because the men are busy fishing on the lake.

There used to be a big problem on the islands with children begging for money or sweets, or islanders demanding payment for photographs. However, this has decreased dramatically in recent years, and you are unlikely to be hassled. Nevertheless, the islanders still use tourism for much of their income, and they sell many crafts made from the totora reeds, as well as offer tourist services. The most common of these is a boat ride in traditional totora boats, which costs around $1 per person. These boats, with beautiful puma heads at the bow, were once used by locals for fishing. However, modern rowing boats are now used by the islanders, and the totora boats are solely for tourists. 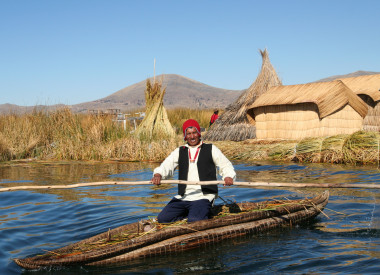