The historic centre of Lima was declared a UNESCO Cultural World Heritage Site in 1988, and although somewhat decrepit, it is still well worth visiting. The beauty of the city's many fine carved wooden balconies found throughout the city is a joy. These are completely enclosed, allowing the person standing on the balcony to look out through the slats without being seen from the street below. This was to protect the modesty of the women of colonial Lima, who would have been compromised had they been seen by passers-by.

The centre of Lima is compact, and can easily be walked around. The best starting place is the Plaza Mayor, where the cathedral is located. Although this is the only building on the square dating from before the 20th century, the plaza is still an elegant, and traditional, focal point for the city. The cathedral was completed at the end of the 18th century, after having been destroyed several times by various earthquakes. Inside the cathedral, the carved choir stalls are impressive. Pizarro's tomb lies in one of the side chapels. On the right of the cathedral is the Presidential Palace, built in 1938 on the site of the Viceroy's palace and before that the site of the palace of Taulichusco, a pre-Hispanic ruler of the region. The palace can be visited, although an appointment needs to made in the Edificio Palacio next door. A granite rock, a monument to Taulichusco, stands in the Pasaje Santa Rosa, a pleasant pedestrian street with many pavement cafes. Other buildings on the square include the Archbishop's Palace, with a fine carved balcony, and the Town Hall.

Probably the most interesting building in Lima is the Monasterio de San Francisco. This was originally built in 1669, and has had to be restored many times due to earthquakes. The carved choir stalls are beautiful, but it is the library that has the finest carvings, including an outstanding wooden ceiling from 1625. The library has 25,000 leather-bound books, and 6,000 parchments. The monastery also houses a fine art collection, including work by the school of Rubens. The highlight of the monastery is, however, the catacombs. These were used as Lima's cemetery until the early 19th century, and 15,000 people were buried in the catacombs. Now there are thousands of skulls and skeletons on display.

Close to the main square is the Church and Monastery of Santo Domingo. This is the oldest church in Lima and is the resting place for San Martín de Porres, the first black saint, and Santa Rosa, the patron saint of Lima. The monastery has some beautiful tiles with biblical scenes, and a series of 36 paintings on the life of Santo Domingo de Guzmán. The nearby Santuario de Santa Rosa houses the remains of the saint and there is a small adobe hut where the saint is said to have lived.

The Church and Convent of Las Nazarenas are famous for the image of El Señor de los Milagros. A powerful earthquake in 1655 destroyed most of Lima, including a church where the image of a crucified Christ was painted. However, the wall on which the fresco was painted survived the earthquake, and was considered miraculous for this. Every October, which is known as the mes morado (purple month), worshippers dress in purple gowns and the image of the Christ, weighing over a tonne, is carried on the shoulders of the faithful around Lima in one of the world's largest processions.

Across the river, over the Stone Bridge, dating from 1610, is the district of Rímac. This was a fashionable area in the 17th century, although it can now be quite dangerous. The Plaza de Acho is the oldest bullring in the Americas, built in 1766, although remodelled in 1944. It can seat 13,000 and still hosts important bullfights every year in October and November. The Monasterio de los Descalzos has a fine collection of religious paintings, including some Murillos and Bittis, and many paintings from the Cusqueña, Limeña and Quiteña schools. In Ricardo Palma's book Tradiciones Peruanas there is a story related to one of the paintings, Miguel de Santiago's Señor de los Tradiciones. This tells of the painter, in a moment of madness, placing a knife in the back of his model of Christ to get a truly anguished look on his face. When he realised what he had done, the model was already dead. The monastery was founded in 1595 by the Spaniard Francisco Solano and the Italian Andrea Corso, and has some pretty cloisters. 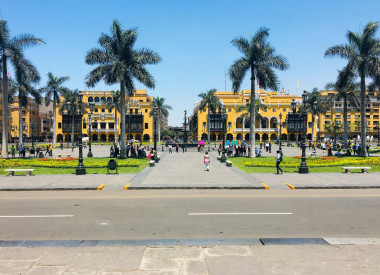