The archaeological ruins at Pachacámac, south-east of the city, are the most important in the Lima area, and although parts are in a poor state of repair, several areas have been restored, giving a good idea about the complex. The site is mostly adobe, although there are several stone structures. There is a small, interesting museum at the entrance to the site, with ceramics and weavings, as well as a wonderful totem idol.

Pachacámac was first occupied around 200AD by people from the Lima culture, who dedicated it to Pachacámac, the creator god. Around 650AD the Wari culture took over the site. From 1000AD to 1450AD the site was occupied by the Ishmay culture, which developed it into a major religious and ceremonial centre. The Inca occupation from 1450 until the arrival of the Spanish in 1532 added several new temples, including the Templo del Sol and the Templo de Acllahuasi. The former has a similar layout to Qorikancha, the sun temple in Cusco, and is worth visiting. The other area worth visiting is the impressive Templo de Acllahuasi, the chosen women dedicated to the sun. This was restored by the Peruvian archaeologist Julio Tello. 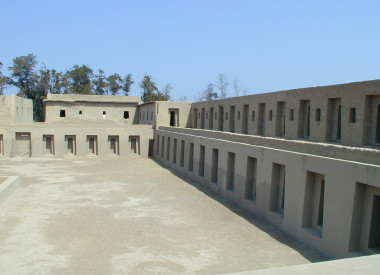