Although there is much to see around Machu Picchu, the most important temples and structures all lie in a relatively small area (about 200m by 400m) in front of Huayna Picchu, the sugarloaf mountain directly behind the ruins. It is therefore possible to explore the main areas of the site in under two hours. However, to explore the ruins fully, and to visit the more remote parts of the site, a full day or longer is required. The different areas of Machu Picchu preserve the names given to them by Hiram Bingham, despite these being wildly inaccurate in many cases.

Entering the site, you pass vast tracts of agricultural terracing, which was probably used for the production of food as well as maize for ceremonial chicha. Passing the terracing, there is a very fine fountain on the left. Next to this is the curved Temple of the Sun, where the finest stonework in the ruins is found. This temple would have been used for observing the sun, and the window in the eastern face of the temple aligns perfectly with the rising sun at the winter solstice. Next to this is a very fine building called The Princess's Palace, although given its proximity to the Temple of the Sun it is far more likely that this was the residence of an important priest.

Climbing the stairs next to the Temple of the Sun brings you to the quarry, where much of the stone for the constructions was obtained. Next to the quarry is the Temple of the Three Windows, where there are indeed three temples facing east. It is likely this temple was related to the three worlds of the Incas, Hanan Pacha, the world of above (representing the gods of the sun, moon and stars); Kay Pacha, this world (representing this life); and Uqhu Pacha, the world of below (representing death). The chakana, the Andean cross, with three levels, was a symbol used to represent the three worlds. Next to one of the windows is a stone half of a chakana. At the winter solstice, the shadow formed by this stone completes the cross.

Climbing up from the Temple of the Three Windows brings you to the highest point of the ruins, the Intihuatana, which literally means the hitching post of the sun. This was used by the Incas to ‘tie' the sun to the earth, and was used to measure the position on the sun in relation to the earth, and was useful for giving information on when the seasons changed, necessary for agriculture. Intihuatanas were found at the majority of important Inca sites, although the Spanish destroyed or damaged almost all of them. The Intihuatana at Machu Picchu is particularly important, as it was the only one not discovered by the Spanish. However, despite surviving the Spanish conquest, the Intihuatana has not survived capitalism as well. In 2000, while filming a Cusqueña beer commercial, the crane with the cameraman fell onto the stone, chipping one of the corners of the Intihuatana. Although the company was fined heavily, the stone is permanently damaged.
The Intihuatana works by casting shadows that line up in different positions at different times of the year. The winter solstice in June was the most important time, as the sun fell directly onto the stone. The summer solstice in December was far less important for the Incas, especially here, as the weather was almost invariably cloudy, so the sun's position was impossible to measure. An interesting aspect to note about the Intihuatana at Machu Picchu is that it is not completely vertical but tilts 13 degrees to the north. This is the exact latitude of Machu Picchu south of the equator.

Across the main plaza is a group of simpler buildings that probably served as a general residential area. To the south of this is the area known as the Temple of the Condor, although Bingham called this the Prison, due to some rocks which looked as if they were used to tie up prisoners. However, it is known that the Incas did not have prisons, as death was the punishment for most transgressions. This was almost certainly a temple to the condor, and a carving of the head of a condor can be seen on the ground, with the rocks in the temple forming the outstretched wings of the bird.

Huayna Picchu and Temple of the Moon

Apart from the main body of the ruins, there are several areas in Machu Picchu worth seeing, and visiting these areas is a good way of getting away from the majority of the crowds. The most commonly visited of these is the peak of Huayna Picchu, the sugarloaf mountain directly behind the open plaza. At first sight it would appear to be impossible to climb this mountain, and the terracing visible near its summit seems an impossible feat. However, there is a well-defined path and the walk to the top takes around forty minutes to one hour and offers a superb alternate view of the ruins. Climbing Huayna Picchu involves very steep drops and ladders up cliff faces.

Part of the way up the climb to Huayna Picchu, a trail forks off to the left. If you follow this trail for about 1½ to 2 hours, along a relatively narrow ledge, you come to the far side of the mountain. Here, there is a fine building, called the Temple of the Moon, although it is unlikely it had anything to do with observing the moon.

The Peruvian National Institute of Culture limits the number of people able to climb Huayna Picchu or visit the Temple of the Moon to 400 per day and permits must be bought in advance.

Machu Picchu Mountain is located to the south-west of Machu Picchu citadel, overlooking the Inca site and Huayna Picchu. Although it is over twice the size of Huayna Picchu, its more gradual assent and wide, well-marked pathways make it a slightly easier hiking option. A round trip will take around 4 hours but it is definitely worth the effort. The trail to the top of the mountain takes you up ancient stone steps crafted by the Incas, with beautiful vistas of the Urubamba River, the surrounding mountain scenery and spectacular aerial views of the famous Inca ruins. There are a restricted number of permits to enter Machu Picchu Mountain so it is recommended these are purchased in advance.

A common side-trip from the main ruins is up to the Intipunku, the sun gate, about 30 - 40 minutes from the main ruins. This is where the Inca Trail emerges, offering hikers their first view of Machu Picchu. The small ruins themselves are not very interesting, but the view is superb.

There is also a trail that leads behind the mountain to the Inca Drawbridge. Here, the path becomes very narrow with a substantial drop to your side. The drawbridge itself is a gap in the path that the Incas left to prevent unwanted visitors crossing. The gap was bridged by logs that could be easily withdrawn. 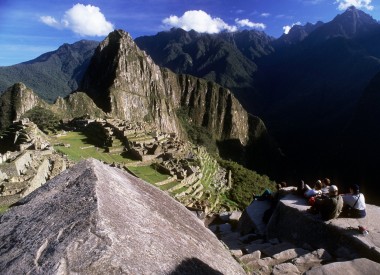