The Nazca Lines are giant etchings in the desert, created by removing rocks from the sand and piling them up to create vast shapes. These include long, straight lines, running for kilometres, triangles and zigzags, as well as the better-known zoomorphic lines, such as the spider, monkey and hummingbird. Impressive enough as giant desert artwork, it is the mystery behind the lines that gives them their enduring appeal.

The Nazca Lines are located approximately 400km south of Lima, on Peru's coastal plains. The best way to experience them is by taking a flight from Ica, which lasts around 90 minutes and offers an amazing view of the geoglyphs from above.

A Landing Strip for Aliens

Inhabited by several tribes during pre-Columbian times, Quito took its name from the Quitus tribe, who lived in the area before the arrival of the Incas. In the mid 15th century, the Inca Pachacutec and his son Tupac Yupanqui extended their empire from Peru in the south, and began conquering Ecuador. By the end of the 15th century, despite fierce resistance by several Ecuadorian tribes, Huayna Capac, Tupac Yupanqui's son, conquered all of Ecuador and parts of Colombia, and Quito was chosen to serve as the capital of the northern half of the Inca Empire. During this period, the Ecuadorian tribesmen assimilated agricultural practices and the social organisation of the Incas, but they maintained their traditional religious beliefs and many customs.

In 1533, the Inca General Rumiñahui destroyed Quito so that it would not fall into the hands of the advancing conquistadors. Just a year later, after the Spanish conquered the Inca, Lieutenant Sebastián de Benalcázar began rebuilding Quito from the rubble and named it San Francisco de Quito. The Spanish promptly established the Catholic religion in Quito, with the first church (El Belén) built even before the city had been officially founded. The Spanish heavily evangelized the indigenous people and also used them for construction, especially in the initial stages.

In 1809 the first proclamation of independence was made, after nearly 300 years of Spanish colonization, in Quito a city of about 10,000 inhabitants. A year later the movement was ultimately defeated, when Spanish forces came from Peru, and killed the leaders of the uprising and about 200 inhabitants of the city. In 1830 the republic of Ecuador was finally proclaimed, and Quito announced as its capital.

Modern Quito is a city of two halves, old and new. The old town remains much the same as it did at the end of the colonial period but the new town bears no marks whatsoever of its colonial past. However, this area has the best hotels and restaurants in the city.

The giant animal drawings in the desert are thought to be linked to the shamanic practices of the Nazca people. There are strong links between the zoomorphic lines and designs on Nazca pottery, which in some cases depict images of shaman flying. It is thought that the shaman took psychedelic drugs, which allowed him to enter the spirit world. Here he would commune with gods and animals in the spirit world to heal the sick. The lines represent many of the animals thought to possess spiritual power, and are therefore considered likely to be linked to the spiritual journeys of the shaman. It is thought that in times of drought the people would walk the lines, evoking the power of the gods and thus bring the drought to an end.

There are probably many other theories as to the origins of the Nazca Lines, and no doubt others will emerge with the years. Although it may be impossible to prove any, the mystery surrounding the drawings makes the lines a fascinating attraction.

Flying over the Nazca Lines

A flight over the Nazca lines is one of the best ways to experience these incredible archaeological features, and Llama Travel offers an excursion that allows you to experience these mysterious etchings from above. The 90 minute flight provides a different persepctive on the lines, and you will no doubt be amazed by their size, precision and diversity of depictions. 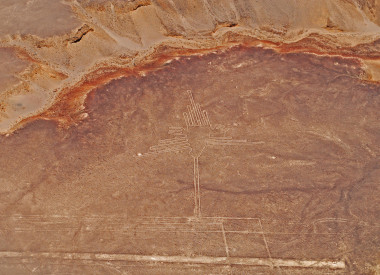