Paracas is a small town on the Peruvian Pacific Coast with good facilities for exploring the area. There are some excellent hotels in Paracas which are ideal for relaxing around and the sea front is attractive. Nearby, the Ballestas Islands are home to penguins, cormorants, boobies, sea lions, dolphins and whales, which can be spotted on a boat trip to the islands.

The town of Paracas is situated 240km south of Lima, on Peru’s Pacific coastline. To get to the Ballestas Islands National Reserve, you take a boat ride from Paracas pier.

The area around Paracas was central to the Peruvian economy in the mid-nineteenth century, due to the vast quantities of guano produced by the sea birds. This was exported to Europe for use as fertiliser, and guano became the most important source of revenue for Peru in this period. Guano is still collected, although its importance for the economy is now far less than before. The area is also of historical importance, as the South American liberator General San Martín landed here with his army before securing Peru's independence from Spain. British troops also landed here to aid San Martín in his struggle.

Nearby, the Paracas National Reserve and the Ballestas Islands are among the most popular tourist destinations on the south coast of Peru, and offer the chance to see some of the best wildlife anywhere in Peru. The area is also of archaeological importance and includes the famous Candelabro etched into the desert hills.

If you would like to experience Peru’s best wildlife, request a quote to find out more. 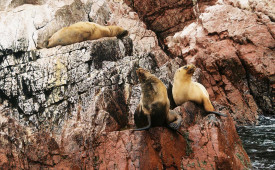