Situated in Peru’s Sacred Valley, Ollantaytambo has given itself the title ‘the living Inca town', and it almost certainly contains the best examples of Inca buildings still in use, although they have been modified somewhat. Wandering around the town and ruins gives the best example of what an Inca town must really have been like.

Ollantaytambo is an attractive town at the far end of the Sacred Valley, 55 kilometres northwest of Cusco, surrounded by the Andes Mountains. The paved road ends here, although it is possible to continue down an unpaved road for a few kilometres. The train to Machu Picchu passes through Ollantaytambo, and all trains stop here.

Ollantaytambo was probably an important tambo (a resting house on an Inca route) for journeys towards the jungle, as well as a fort for protection against attacking tribes from the jungle. However, it is interesting to note that some of the heaviest fortifications are not facing the jungle but rather up the valley towards Cusco. Although there are claims that this was probably due to Manco Inca using the town as a defensive post against the Spanish based in Cusco, it is unlikely that these walls originated from that period as the stonework is very fine, and it is unlikely that the fleeing Inca would have had time to construct such a wall. Rather, it seems that these defences were built during the Inca reign, long before the arrival of the Spanish. A likely explanation comes from a legend surrounding the site, from where the site also gets its name. Ollantay was an Inca general under Pachacuteq, and was in charge of Ollantaytambo. The general fell in love with Pachacuteq's daughter, but the Inca forbade this love. The general therefore rebelled against Cusco (hence the construction of the defensive walls), but was defeated in battle. There are some legends that say that Pachacuteq relented after capturing the general, and allowed Ollantay to marry his daughter.

There is much speculation as to the reason for the failure to complete the site. Some claim that it was given less importance after Pachacuteq's death. Others, that its construction was interrupted by the civil war between Huáscar and Atahuallpa, or by the arrival of the Spanish. Whatever the reason, the work that was in progress indicates that this was one of the Incas' most important sites.

There is a small museum in Ollantaytambo, with archaeological and historical information on the area, as well as a room dedicated to local crafts and beliefs. In addition to the site at Ollantaytambo, a couple of hours down the valley is the site of Pumamarca, which consists mainly of Inca terracing.

The main attraction in the area is the Inca ruins of Ollantaytambo, with some very fine terracing and some exceptional stonework. Entrance is by the Tourist Ticket.

Temple of the Sun

Entering the site there are some beautiful terraces. These may have been used for agriculture, although it is also possible that they were purely decorative. Climbing the steps by the side of the terracing brings you to a very fine double doorway. This was the entrance to the Temple of the Sun. Next to the door is another temple, incomplete, with ten windows. The quality of the stonework and the proximity to the Temple of the Sun indicates that this was probably the Temple of the Moon. Walking around the Temple of Moon brings you to an open platform. This was the Temple of the Sun, although it was never completed. In fact, this site is very interesting as it gives a good insight into the construction techniques of the Incas. There are many stones on their sides, and there is a ramp that was used to drag the stones from the quarry on the other side of the valley, 6km away. Between the quarry and the site there are approximately 50 stones that were in the process of being brought to Ollantaytambo. What is particularly impressive is that these huge stones would have had to cross the river. How this was done is unclear, although there are suggestions that the Incas diverted the course of the water around the stones. Upon completion of the site, the ramp from the quarry would have been destroyed.

Even in its incomplete state, the Temple of the Sun is amazing. There are six very impressive carved monoliths, among the finest in the Inca world. There huge stones were joined together with an incredible perfection, by pouring molten bronze into T-grooves joining the stones. These grooves are clearly visible on some of the stones lying on the ground. The monoliths originally had carvings on them, although these have now been destroyed. However, the outlines of a chakana (the Andean Cross) and a puma are visible. Both of these symbols correspond to the Inca perception of the order of the universe. The chakana was a cross with three different levels, representing the three worlds: Hanan Pacha, the world of above (representing the gods of the sun, moon and stars); Kay Pacha, this world (representing this life); and Uqhu Pacha, the world of below (representing death). Each of these worlds was represented by an animal: the condor, the puma and the snake. It is important to note that these worlds do not correspond to the Christian ideas of Heaven, Earth and Hell. In fact, the negative imagery associated with the snake, for example, was not shared by the Incas.

The site also contains many fountains. The water for these came from a sacred lake, Yanacocha, 14km away. There are also many other buildings with cruder stonework. These would originally have been plastered and so would not have seemed so crude. These were less important temples as well as accommodation.

The mountain opposite the ruins is Pinkuylluna, an Apu (a sacred Inca mountain, worshipped by the people), and there are storehouses visible on the side of the mountain.

Ollantaytambo is an interesting part of any trip to Peru. Contact us to find out more about visiting the Sacred Valley of the Incas. 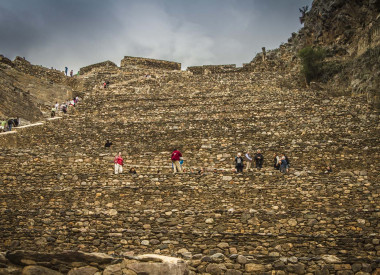