The Short Inca Trail is a 9-mile walk from the Urubamba River to Machu Picchu, via the beautiful ruins of Wiñay Wayna. The walk is part of the same network of trails as the four-day Inca Trail, and the final part of the two walks is the same. The Incas built an enormous set of trails that spanned their empire, enabling them to cross great distances relatively rapidly. These trails were well maintained, and by using chasquis (messengers), messages or goods could be sent all over the empire very quickly. Each chasqui would run a leg of approximately 10km before passing on the message to the next chasqui. For example, it was said that fish from the port of Puerto Inca, south of Nazca, could get to Cusco, 250km and many mountain passes away, in under 24 hours.

After an early coach and train ride from Cusco to km 104, you cross the Urubamba River to start the hike.
Here, there are some modern buildings with toilets, where you must register and show your entrance ticket
and passport. Just beyond the first checkpoint are the ruins of Chachabamba. The trail climbs rapidly,
taking about three to four hours to get to Wiñay Wayna. The walk offers some very beautiful views of the
ruins of Choquesuysuy visible below, next to the hydroelectric plant, and the Inca terracing of Inti Pata,
on the hill in front. Just before arriving at Wiñay Wayna the trail passes a beautiful waterfall.

The ruins of Wiñay Wayna, discovered in 1941, are some of the most beautiful in the Inca Empire. The
site was mainly agricultural, and the curved terraces on the incredibly steep slope are breathtaking. The
name Wiñay Wayna comes from a variety of orchid, meaning forever young in Quechua, as the orchid
blooms all year round. Apart from the terracing, the site includes a complex of accommodation and
ceremonial structures. Next to the structures there is a series of ten baths, joined by small waterfalls.
Given the importance of water in Inca ceremonies, this seems to indicate the religious importance
of Wiñay Wayna. The location of Wiñay Wayna was probably chosen due to its relationship to certain
mountains in the area, including the Apu Veronica.

After a packed lunch, you continue the trail, walking from Wiñay Wayna to the Intipunku (Sun Gate), taking about two hours. As you climb the final few steps and arrive at the sun gate you are greeted by your first, spectacular view of Machu Picchu. The trail down to the ruins themselves takes about half an hour. You do not visit the site on the first day, as it is too late. You descend by bus into the valley where you spend the night in your hotel. The village of Aguas Calientes received its name from the hot springs, where you can bathe.

In the morning, enter the site of Machu Picchu, where your guide will give a tour of the ruins, before you catch the afternoon train and coach back to Cusco, arriving in the evening. 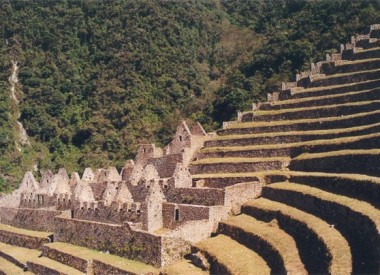